Archive for the ‘Blog’ Category

Do you ever feel like your brain is fluttering around like a lost helium balloon on a breezy day? Words slipping away before you can yank them from the far corners of your mind? If you ask people over sixty what they fear most about aging, dementia and Alzheimer’s are at the top of the […]

In late June (2013) the FDA approved paroxetine (Brisdelle) to treat hotflashes associated with menopause. Brisdell is a lower dose version of the drug Paxil, a selective serotonin reuptake inhibitor (SSRI). Paroxetine is used to treat depression, obsessive-compulsive disorder, anxiety, panic attacks, and a host of other psychiatric disorders. It’s a powerful drug with a […]

If aging with radiance is on your agenda, add the word telomere to your vocabulary. My online dictionary defines radiance as “an attractive combination of good health and happiness.” I want that. A 2010 article in the Journal of Nutritional Biochemistry defines telomere as “the DNA-protein complex that protects the ends of human chromosomes. Telomere length is an indicator of biological aging. Telomeres […]

Why is it often our impulse to think that food grown in some exotic, far-off place is more super-duper than food grown in a modest garden out in our own backyard? Think about it. Himalayan sea salt. Amazon rainforest acai berries. Borojo pulp (AKA: jugo de amor) from the jungles of Panama. Noni, goji, mangosteen. […]

I’ll start this post with a few tips and awe-inspiring brain facts to blow your mind (so to speak), then we’ll head to a cognitive gym class called Lumosity. The human brain contains about 100 billion neurons. Yes, that’s billion with a B. A neuron is a specialized cell that transfers information via electrical and chemical […]

According to the National Diabetes Information Clearinghouse (a service of the National Institutes of Health), 25.8 million Americans of all ages have diabetes and 79 million Americans aged 20 and over have pre-diabetes. Fifty percent of people aged 65 or older have pre-diabetes. That’s a lot of people with a lot of associated complications. These […]

I’ve been doing a lot of research lately on brain health and which nutrients and lifestyle behaviors play a role in keeping cognitive discombobulation at bay. I’m guessing most of us who are midlife or older occasionally worry about losing more than just our car keys. Like maybe our marbles. The thought of memory loss […]

You are currently browsing the archives for the Blog category.

Melissa lives in the mountain town of Salida, Colorado and is chief lifestyle wonkette and wanna-be science writer at Artful-Aging.com, your ultimate guide for the most current “need to know” information on optimal aging and true wellness. Read more… 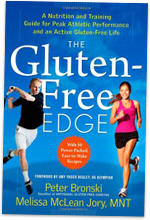 Co-written with
Pete Bronski
Buy it
on Amazon